After Windows Vista came out, many developers started to use code signing certificates to digitally sign their software and installation packages. This tutorial describes how to add a context menu to Windows Explorer to quickly sign executable files and DLL’s on a development workstation. The result looks like the following screenshot:

SignTool is a command-line utility that digitally signs files, verifies signatures in files, or time stamps files. It is available as part of the Windows SDK which can be downloaded from Microsoft website. The command line looks like the following:

SignTool is mainly used in post-build scripts. Although it is often required to sign a standalone EXE or DLL without running a complete build script. Personally I often perform quick tests of my software and these tests require executables to be signed.

I use the following Hstart command line to run SignTool without a console window:

After signing is done (note the /WAIT switch), a simple message is displayed telling me that everything is OK: 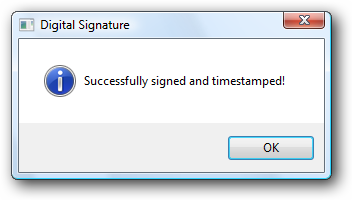 If something went wrong (for example: if the EXE file is read-only or if the timestamp server is not accessible), SignTool returns an error and the following message is displayed: 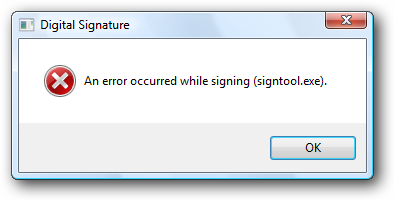 To enable this Shell command, create a new .REG file with the following content:

A few notes on the REG file:

The sample REG file is included in the Hstart package (see Examples\SignTool).