Windows 7 has introduced many new window arrangement features such as Aero Snap and Aero Peek. It includes docking windows to the edges of the screen, vertical expand, easy maximize and other enhancements that make it easier to manage multiple windows.

Can’t switch to Windows 7 right now? WindowSpace brings the most outstanding Windows 7 features straight to your Vista or XP desktop. Importantly, WindowSpace not only transfers the new window management functionality to Windows 2000/XP/Vista, but also improves and extends it to provide exceptional productivity on a multi-monitor or big-screen system.

The Snap-To-Side feature lets you expand and maximize windows by dragging them to different edges of the screen. To trigger one of these actions, touch the corresponding edge of the screen with the mouse cursor while moving a window. 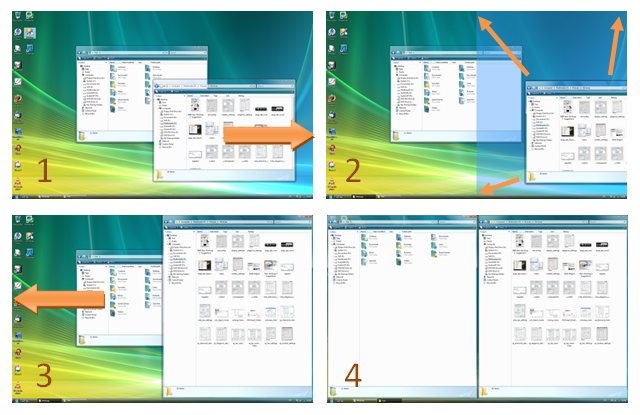 Resizing to the edge and maximizing vertically: 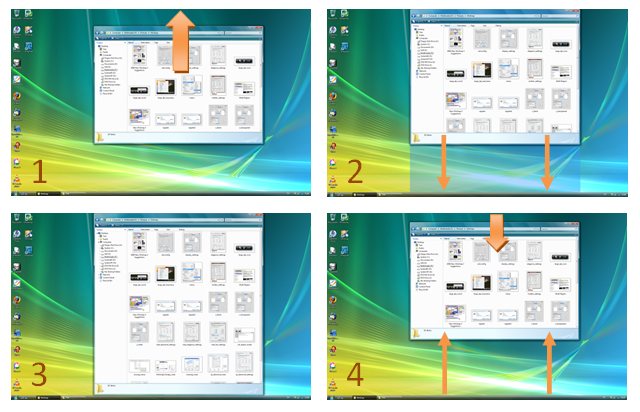 As you can see from the above screenshots, for "Snap-To-Side" and "Maximize Vertically", unsnapping window from the edge restores its original size. You can also right-click the Maximize button to do this.

Window Management Better Than in Windows 7

It seems unbelievable in 21st century, but the standard Aero Snap feature in Windows 7 ignores the edges between monitors and doesn’t allow you to snap a window to them. WindowSpace fixes this elegantly, allowing you to snap any window not only to a desktop side, but to a monitor side as well. Thanks to this you can arrange windows on your multi-monitor desktop any way you like, not limited with any restrictions!

WindowSpace makes it easier to arrange your working environment and provides the most effective desktop space utilization. For instance, you can precisely snap a window to the edge on one of your monitors so that it wouldn’t get out to another monitor.

Snap-To-Corners is another amazing feature of WindowSpace 2.x. It extends the original idea of Aero Snap in Windows 7 by implementing a couple of new exciting options. In addition to the existing option of resizing a window to a half-screen size, it adds another trick: move a window to a corner and it momentarily expands to a quarter of the screen size. 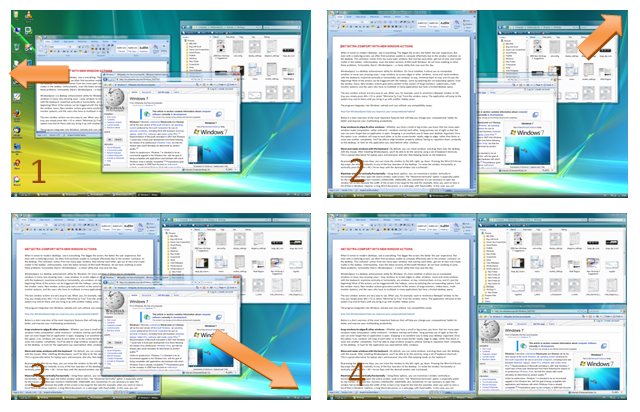 You can turn this option on/off in the Settings, Moving & Resizing tab. As for "Snap-To-Side" and "Maximize Vertically", unsnapping window from the edge restores its original size. 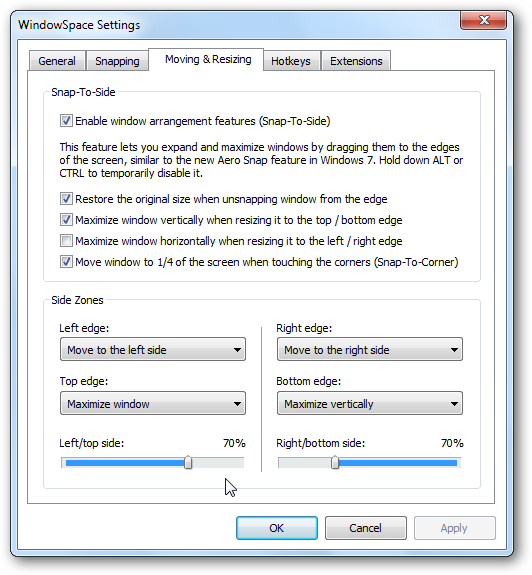 WindowSpace is way more configurable than the Windows 7's Aero Snap feature which you can only turn on and off. With WindowSpace, you can quickly customize the exact way each option works.

Next: Moving and Resizing Windows Quickly with Keyboard Shortcuts